How Can Healthcare Executives Combat “Quiet Quitting” in the Revenue Cycle?

Today, we’re going to talk about the labor force – the new generation of workers. I read an article the other day that introduced a theme to me called “quiet quitting”. What that means is people are employed by you, but they’re not really doing any meaningful work even though you are paying them. The problem is already here, and it’s only going to get worse as generations have changed the way they look at work/life balance. There’s nothing wrong with work/life balance. I’ve incorporated a lot more balance in my life over the last couple years, coming out of COVID than I ever have in my my career. I don’t go on as many business trips. I exercise more and coach youth sports. I’m able to be a better husband, father, and friend. However, I’m also very effective at the work I do. I’m smart about how I set up my workday.

So, apply this to the people in your revenue cycle that are doing everything from pre-service all the way to the zero balance. You may not get eight hours of productive work from them. You’re probably not even getting two hours of productive work. However, if you can grab two hours of effective work with which you can measure the outcome, think about what that means for that employee and your bottom line. I can just keep touching buttons with no outcome and be perceived to be productive, but not actually be effective. I’m a champion of effectiveness and I really don’t care about productivity. So you’ve got to be able to measure these individuals. There is not a PM/EMR system on the market that is ever going to take the revenue cycle staff seriously when it comes to measuring their work effort and the the financial outcome you are getting as a result of that work effort. Here at MedEvolve, we had to build our own cloud-based ecosystem to sit on top of our own practice management system.

MedEvolve Effective Intelligence gives you the analytics to measure revenue cycle employee effectiveness, zero-touch resolution, and many other data points to help you set up an incentive-based program for your staff.

Now, by capturing the right structure data for every unit of work being done by every revenue cycle personnel that you’re paying to do a job, you can start to evaluate effort and outcome and build a reward system around that using financial clearance and medical billing workflow automations plus real-time analytics. When you implement reward systems, which includes recognition among peers, watch what happens to your revenue cycle performance – it will explode in a positive way. You will have a need for fewer people and you will have a much leaner revenue cycle and much higher zero-touch rate, which means no human intervention was necessary for payment.There’s not a PM on the market can tell you that. A 60% zero-touch rate is the best I’ve seen. That means 40% of the time we’re having to get humans involved in the process.

Then, when you start to look at where humans are getting involved, you will realize that if your team were incentivized to just do the job right the first time, you would not need as many people, and you would have a much higher zero-touch rate leading to better net collection rate and higher profit margin. Effective Intelligence is about capturing the right structure data that tells the story of labor effectiveness, which holds them accountable allowing them to work from anywhere.

If they are only putting in two hours of effective work of the eight hours you pay them, measure the outcome and tie it to a reward system that creates the recognition that this new generation needs.

Without structured data to tell the story of labor effectiveness, you are probably overstaffed

This is where the revenue cycle is going and it is where the economy in general, is going. In my opinion, revenue cycle innovation lags two decades behind the rest of the business world, but in this scenario right now, you cannot wait. You need to get the right technology and process in place that measures structured data telling the story of the effectiveness of your labor force. Also, you need to be able to tie the structured data, financial outcomes and work effort to a reward system that recognizes your top performers. When you do that, call me 90 days after you’ve started and let’s talk about how many people you now trying to find, because you won’t be. You will probably be overstaffed at that point.

Your practice management system can't measure labor effectiveness, therefore you cannot put reward system in place to recognize positive behaviors and outcomes. That is the real problem with quiet quitting in the revenue cycle.This new generation of workers want know that if they work effectively at getting a positive outcome, they are individually rewarded and recognized.

Why do you keep looking for people you don't need?

Nine times out of ten, I tell clients and prospects that they are overstaffed. “Why do you keep looking for people you don’t need?”  The answer is usually “what do you mean? I’m understaffed.”  They have an effectiveness problem that the PM system can’t measure and you don’t have a reward system in place to recognize positive behaviors and outcomes. That is the real problem with quiet quitting in the revenue cycle. This new generation of workers want know that if they work effectively and get a positive outcome, they are rewarded and recognized.

Margin is the key to success in healthcare. You cannot maximize it without real-time metrics in your revenue cycle. Take the 3 minute quiz to find out your Effective Intelligence Quotient (EiQ). 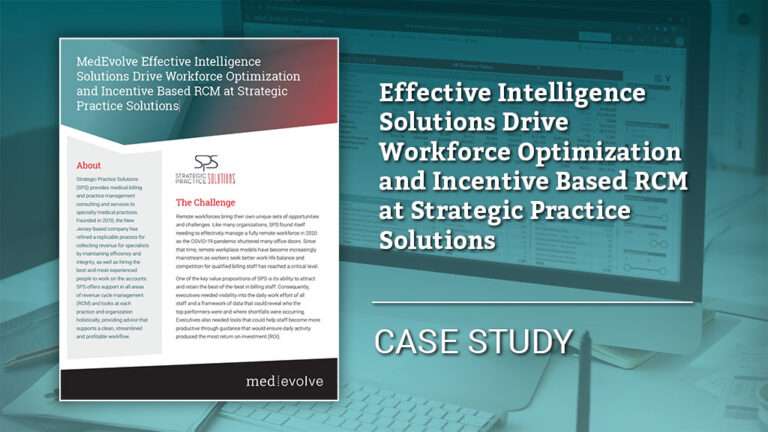 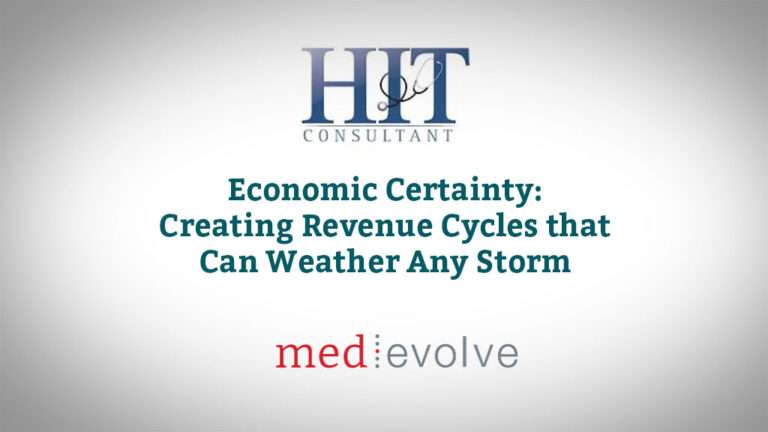 Economic Certainty: Creating Revenue Cycles that Can Weather Any Storm

Staffing shortages, inflation & operational margin is keeping healthcare leaders up at night. Don’t settle for a posture of defense. 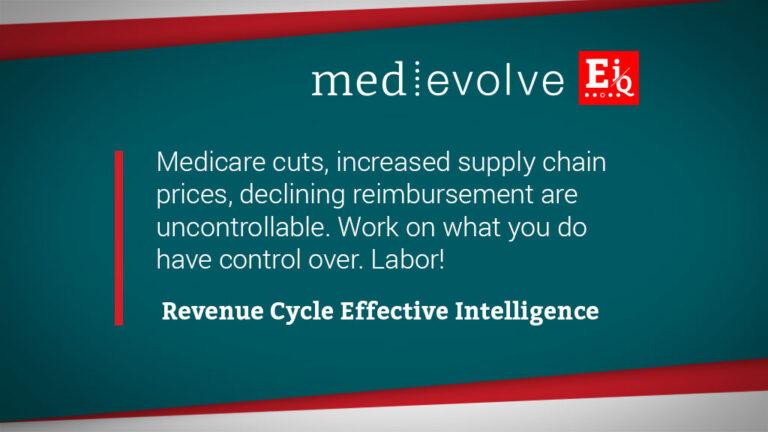 Shrinking margins in healthcare for 2023: How do we get it back?

Medicare cuts, increased supply chain prices, declining reimbursement are uncontrollable. Work on what you do have control over. Labor! 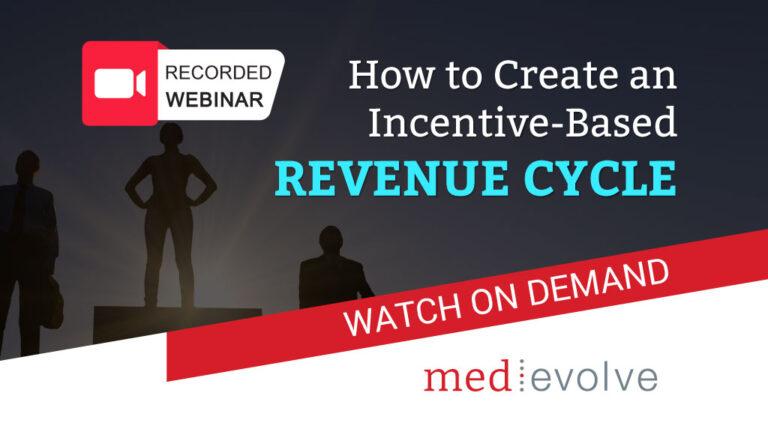 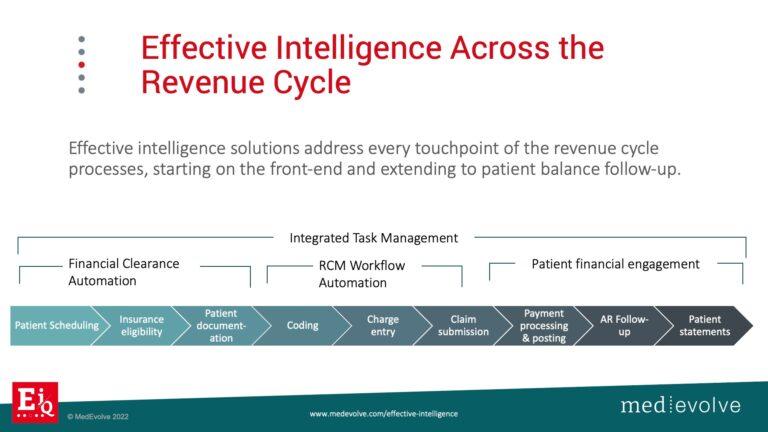 How can Effective Intelligence technology maximize margin in your revenue cycle?

Reimbursements are flat or declining, and costs are increasing. The negative economic factors that your healthcare organization can’t control can be offset with centralized workflow & real-time analytics added to your practice management system. 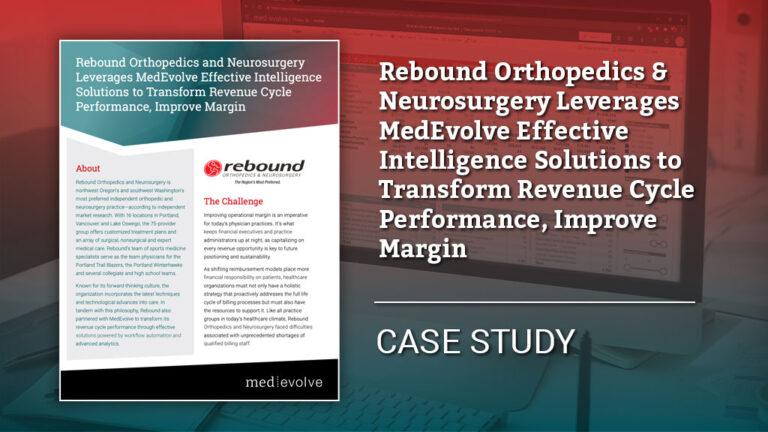 The organization is realizing better bottom-line performance with fewer FTEs. Zero touch claims that require no human intervention now account for 62.2% of total. Overall closed balance NCR is 98%—above the industry benchmark of 97%. 57% of self-pay revenue comes from mobile engagement.

Outsource your medical billing to us with over 20 years of revenue cycle experience incorporating Effective Intelligence in house.

Increase productivity and visibility into front & back office processes while keeping your staff focused.​ 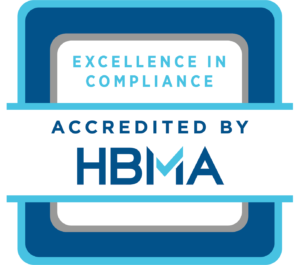 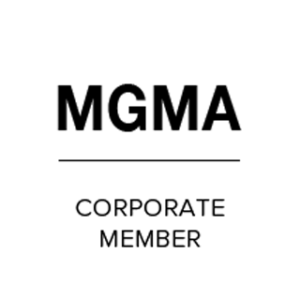 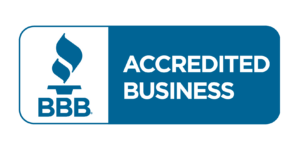